The story accelerates as a 10-year-old boy, Rakovei—who is visiting his native village Phyamaichi—sees the violence taking place, unfolding in front of his eyes.

This debut novel by Veio Pou, who teaches English at the Shaheed Bhagat Singh College, University of Delhi, takes us towards the Northeast. To be precise, towards the ground realities in and around Manipur of the 1980s and 90s.

Brilliantly put together, the story flows along, carrying with it the heady combination of the stark political imprints, together with the human situation and the tragedies that come along.

Along with it, what one gathers are the vital inputs to the daily life of the apolitical… Simple, uncomplicated lives, till about the time violence and counter-violence intrudes and affects all—men, women, children.

Yes, dark realities unfold. Around the spring of 1987, sheer violence erupts, when cadres of the Nationalist Socialist Council of Nagaland attack the Assam Rifles outpost at Oinam Hill. With that, the expected aftermath. Horrifying retaliation follows—Operation Bluebird. 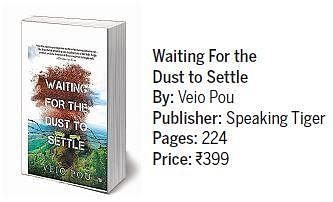 The story accelerates as a 10-year-old boy, Rakovei—who is visiting his native village Phyamaichi—sees the violence taking place, unfolding in front of his eyes… Scenes of sheer brutality hit the young boy’s psyche as he sees his relatives and the village people, caught in that ‘war’ between the Indian Army and the Naga underground  rebels. Woven into the plotline, are not just details of the Naga struggle, but there’s also focus on the tussles between the different Naga factions.

Also, though there are detailed descriptions of human tragedy, the sensitive way in which they have been handled adds to the storyteller’s prowess. What comes across as immensely readable is the way this story has been put together. In fact, once I started reading I had to complete the book at one go; absorbing all!

And along the read, one picked up so many aspects to the daily life of the people living in that belt.One felt connected to them, too. Going a step forward, one felt as though transported to the Kashmir Valley whilst reading details of security forces making house to house searches and questioning the scared villagers. Yes, there seems such similarity in the way the security forces control the lives of the hundreds and thousands of the apolitical civilian—through ‘boot power’.

Yet life goes on… it has to. In fact, the last sentence of this novel carries the crux of human  existence—‘He felt he was living between hope and despair’.

If the title of this novel—Waiting For the Dust to Settle—doesn’t relay some level of hope, there’s this opening line from the author: ‘To all those who have silently endured the pain, ‘waiting’ for the unborn nation, and to those who look to the Lord for justice.’

And one cannot overlook these lines of Easterine Kire from Barcelona Dreamtime, which stare hard at the very start to this novel:

‘I believe that stories are powerful they have the power to transform lives the magic to work peace and then, it is so important that they be told in any way, even in ways that we have not thought of before in pictures, as gestures, as dance, as song in any way they can be told reinvented, breathing life in new forms so that they can touch lives and work their transforming magic.’ 8 Middle Grade and YA Fantasy Novels...